Building community through music since 1983! 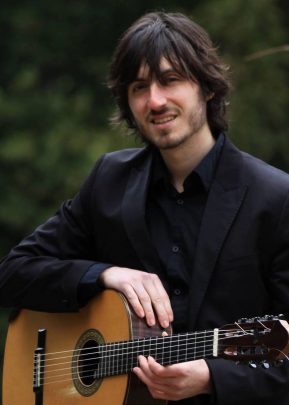 Award winning guitarist Francesco Barone has performed throughout the United States as a soloist and chamber musician. He has been presented at guitar festivals and societies including The Hartt School Guitar Festival, the Connecticut Guitar Society and the New England Guitar Society. Francesco was also included on a La Bella Strings sponsored concert in 2011 in which he was a featured artist. His performances have been broadcasted on National Public Radio.

In addition to traditional venues, Francesco also interacts with local communities where he resides in Connecticut and regularly performs outreach concerts at town libraries. He also connects with younger audiences by giving house concerts through the recent classical music startup Groupmuse.

In 2015 Francesco presented, Nikita Koshkin: Three Compositional Styles for Flute and Guitar That are Unique Yet All Intrinsically Russian, a lecture recital that explored the varied styles of Koshkin’s chamber music. The presentation serves as the genesis for Francesco’s doctoral essay which explores Koshkin’s early chamber work, Sonata for Flute and Guitar (1982).

Francesco received a Doctorate of Musical Arts and Master of Music from The Hartt School, University of Hartford where he studied with Professor Emeritus of Guitar Richard Provost. At Hartt Francesco was awarded the Graduate Teaching Fellowship in Guitar and performed with the prestigious 20/20 chamber ensemble. In addition, he holds a Bachelor of Music from Temple University in Guitar Performance where he studied with guitarist/composer Allen Krantz. While at Temple Francesco performed with the Temple University Opera in the award-winning production of Verdi’s Falstaff and was a prizewinner in the Philadelphia Classical Guitar Society Guitar Competition.

As a dedicated teacher, he has taught at Columbia University, Hartt School of Music and Capital Community College.

Francesco teaches on Mondays and Wednesdays.